The first 1.4 miles section of a special, off-road recreational trail for the September 11th National Memorial Trail in Garrett, Somerset County, is complete.

It’s a milestone for trail organizers, who cobbled together a 1,300-mile network of existing bicycle, pedestrian trails and roads connecting the three 9/11 memorial sites in New York City, Arlington, Va., and Shanksville.

“It’s the first step forward for the trail to attach to the Flight 93 National Memorial,” said Tom Baxter, president of the September 11thNational Memorial Trail Alliance.

The new section, accessed in Garrett, cost about $1 million. The donation of the land for the new rail-to-trail segment came from CSX, Baxter said. Developing the trail was paid for by grants from the state Department of Conservation and Natural Resources and PennDOT, plus several private donations, he said.

Within a decade, the new segment will be part of a planned 20-mile connector between the Great Allegheny Passage Trail in Garrett and the Flight 93 National Memorial. Later phases of construction will take the trail north through Berlin to the memorial.

The off-road trail segment is 8 and 10 feet wide with a smooth surface of crushed limestone away from car traffic, 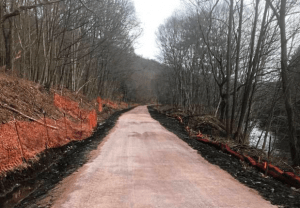 making the journey from Garrett to the Flight 93 memorial accessible for riders and walkers.

“It’s a trail for all people,” Baxter said.

Although the new segment is not exceptionally long in the scheme of things, it’s part of a vital link from the memorial to Garrett, creating a new outdoor destination and journey, potentially boosting tourism in the Somerset County towns along the way.

The new segment is also an integral piece of the national trail puzzle, tying together the Flight 93 site to reach another 9/11 site, the Pentagon in Arlington, Va. When the 20-mile trail connector is complete between the Flight 93 memorial and Garrett, cyclists and walkers then can pick up the Great Allegheny Passage, the 150-mile trail running from Pittsburgh to Cumberland, Md.

But there still is a little work to finish the new segment including marking an almost mile-long, on-road section traversing secondary, low-volume traffic roads in Garrett connecting the new segment to the Great Allegheny Passage trailhead.

“Most of the trail is going through the former railroad corridor but a small section is being developed on the road to get from the Allegheny Passage to the railroad corridor adjacent to Fogletown Road in Garrett,” said Jeffrey McCauley, director of trail development.

Local businesses in the towns along the trail will benefit economically, especially small businesses catering to tourists, cyclists and walkers. “We’re getting to that trail town feeling especially in Berlin,” Baxter said.

As the trail winds through Garrett, Berlin and into Shanksville, those three towns will see increased tourism,” said Lindsay Pyle, parks and trails director for Somerset County.

“Berlin is excited,” Pyle said. “The trail will come right past Whitehorse Brewing, where there are plans for a special 9/11 brew,” she said.

About 45 miles of the trail will run through Somerset County, from Garrett to the Cambria County Line, Pyle said. It will not all be off-road.

In the springtime, when the ribbon cutting for the trail segment is scheduled, signage and share-the-roads signs will be installed in Garrett. “Everyone is excited and curious about the new section of trail,” she said.

Mary Ann Thomas is a Tribune-Review staff writer. You can contact Mary at 724-226-4691, mthomas@triblive.com or via Twitter .