Shovels in the dirt, trail to come

On September 4, 2020 a lot of preparation and planning culminated in a little bit of dirt-moving. As Judy Ellich of the Somerset Daily American wrote:

“After years of working through wetland mitigation and funding matters, construction on the first segment of the September 11th National Memorial Trail starts next week.

The movers and shakers of the project celebrated Friday afternoon at the Great Allegheny Passage Garrett trailhead with speeches, 23 shovels, a heaping pile of dirt and camaraderie.”

Also on the docket, placement of a bench to honor David Brickley, Director of Virginia’s Department of Conservation & Natural Resources. Mr. Brickley is credited with the idea for a trail connecting the three historic sites of 9/11/2001 a mere four days after the terrible day itself. Speaking at the conclusion of a conference for Greenways, Blueways and Green Infrastructure in Arlington, VA, just blocks south of the Pentagon, Brickley proposed creating a “continuously linked multi-purpose, non-motorized trail offering varied opportunities including walking, hiking, cycling and handicap accessibility as an active memorial honoring those who gave their lives upholding America’s values of freedom and democracy.”

That proposal is now well officially on its way to reality here in Somerset County. 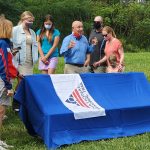 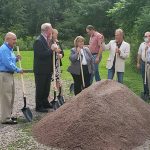 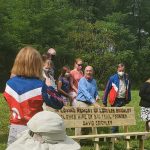