Happy Birthday to the Bollman Bridge.

At Mile 30.1, the Bollman Bridge carries visitors over Scratch Hill Road.  It has been carrying people, bicycles, automobiles, trucks, tractors, and even steam engines over things for 150 years! 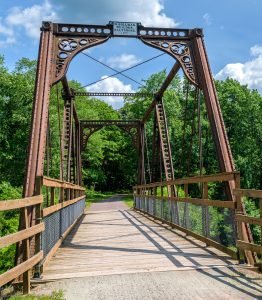 First used by the Pittsburgh & Connellsville RR, it lasted only 15 years, when the railroad expanded. Then the 81-foot bridge moved to Somerset County to access a farm near the Salisbury Viaduct.  When the farmhouse was vacated, the bridge was destined for the scrap heap.  SCRTA thought otherwise.

It was lifted in one piece, put in a nearby field, disassembled, and parts taken to the Meyersdale Train Station.  After being carefully marked as to which goes where it was reassembled and trucked to Scratch Hill Road in 2007, where new abutments were ready and waiting. Once redecked, it opened to visitors. In 2021 the original builder’s plate was restored thanks to Deak & June Deakins and was put back on the bridge in time for its sesquicentennial.

To visit the Bollman Bridge, use the Meyersdale Train Station Trail Access.  From the trail side of the station, turn right and ride 0.7 Miles.  For another bridge, continue 1.2 miles to the Keystone Viaduct.

Click on the blue text above for a map and directions to these locations.