Well, that’s not exactly what happened, but have you noticed that the section of the Keystone Viaduct crossing the CSX tracks is higher than the portion over the woods, creek, and road?
There’s a reason.

In 2010, CSX upgraded its line to accommodate double-stacked container cars. However, the Keystone Viaduct was too low – just under two feet – for clearance of the taller stacks.

There were two solutions; lower the tracks or raise the viaduct. CSX took the latter. In August of 2012, preparations were made to lift the trestle segment. But, the Somerset County stewards of the GAP added limitations to permit the work.
Bike traffic during the day couldn’t be interrupted.

Thus, CSX built the ramp leading up to the bridge from the east side at night, one lane at a time. The trail at the west end was also rebuilt to bring it to a new level. 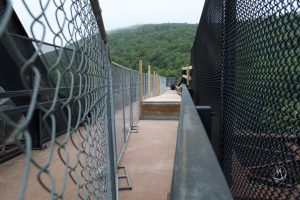 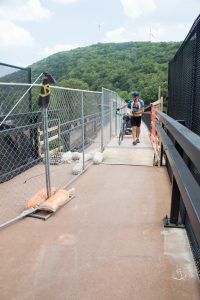 Once the ramps were complete, the actual lift took place.
Massive hydraulic jacks (the big green cylinders) at either end of the span lifted it – also at night. It took two nights to raise the section eighteen inches. 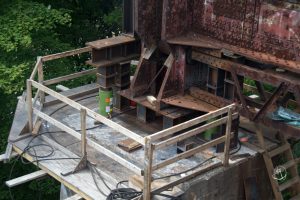