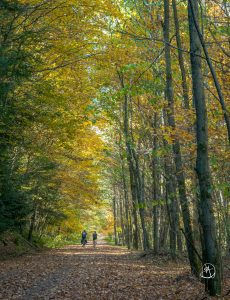 Leaf peeping is a favorite autumn activity in western Pennsylvania. And the GAP provides a leisurely path for getting up close and enjoying the season’s color, scents, and crisp feel.
The eighty-plus miles of the trail winding along the waterways of the Allegheny Mountains from the Eastern Continental Divide to Connellsville hold plenty of varying opportunities.

The show begins in late September and goes on until early November.

Bridges offer a splendid perch to scan a panorama of colorful forested valleys and glistening water. Away from the lofty views, the trail winds through a tunnel of hues with fall wildflowers adding highlights to the forest floor.

It’s hard to pick just one part of the GAP to ride in the fall, but Rockwood, PA, is a good choice. From the easily found Trail Access Area, riding either direction through long sections of forest cover and occasional openings.

Riding toward Confluence passes through the Pinkerton Loop with two bridges and a tunnel. In the opposite direction, toward Meyersdale, is the Salisbury Viaduct over farms, fields, and the Casselman River.

Either direction will satiate even the hungriest leaf peeping appetite.