To: Punxsutawney Phil, From: Sally Rockbolt, Respectfully, I disagree. 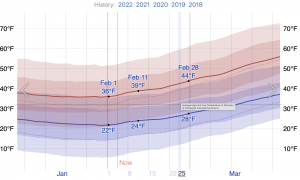 The memo of Wednesday, February 2, 2022, predicting “six more weeks of winter,” was just slid under my west door.

Your extensive experience in rodent meteorology is recognized and appreciated.

However, I also have long followed western Pennsylvania weather from here inside the Big Savage Tunnel near Deal, PA, based on factual historical records, I have lots of time for internet searches since the tunnel doors are locked, rather than anecdotal woodchuck umbra.

Thus, given the data presented above, my definition of the end of winter is when the Daily Average High temperature begins to rise from its yearly low point.  As you can see, the day prior to your prediction, the average high temperature was 36 Degrees, the yearly low point.  From there on, the days begin to warm and by the end of February it’s a relatively balmy 44 degrees.

That leads to my contrary prediction an that there will not be “six more weeks of winter,” but indeed, and cheerfully, spring is on the way.